Thank you to the following CALBO Members for your contributions to our industry. It is with great pride that we announce the 2017-18 CALBO Award winners.

Building Department of the Year – City of San Jose 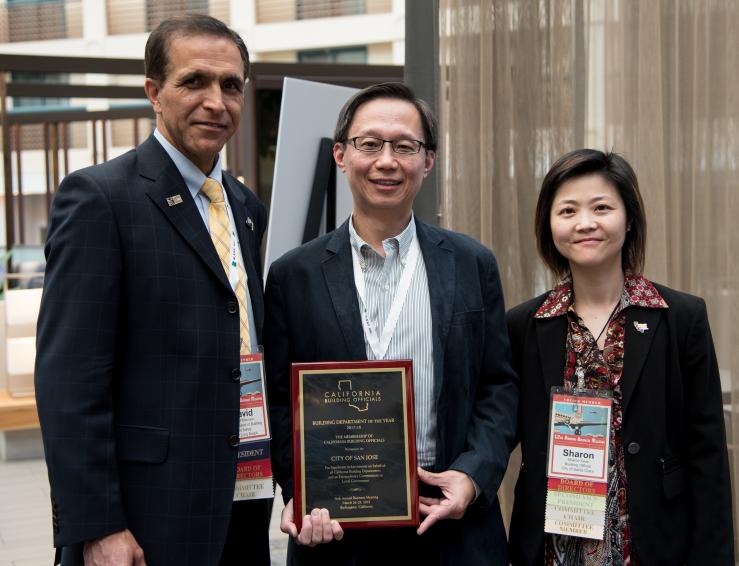 The City of San Jose has provided quality service to constituents through a series of programs, including reaching out to the “Next Generation of Building Officials” at local high schools and colleges; a highly-successful Streamlined Restaurant Program; an award-winning Over-the-Counter streamlined home improvement service from the Permit Center; an expanded Coordinated Plan Review Program for new multifamily and commercial/industrial buildings; a tri-lingual Small Business Ally Team; and a Special Tenant Improvement Team.

The heart of Silicon Valley has naturally embraced technology, making it easier for constituents to book appointments and request permits online, and fully implementing an Electronic Plan Review program to save time, money, paper, and energy while improving the customer experience.

Mr. Frank Bush is the 2017-2018 CALBO Building Official of the Year.  Mr. Bush has been with the City of Los Angeles’ Department of Building and Safety for nearly 30 years, currently serving as the General Manager and Superintendent of Building.  He has a long-standing reputation in the CALBO organization as a Commissioner on the CALBO Training Institute (CTI). 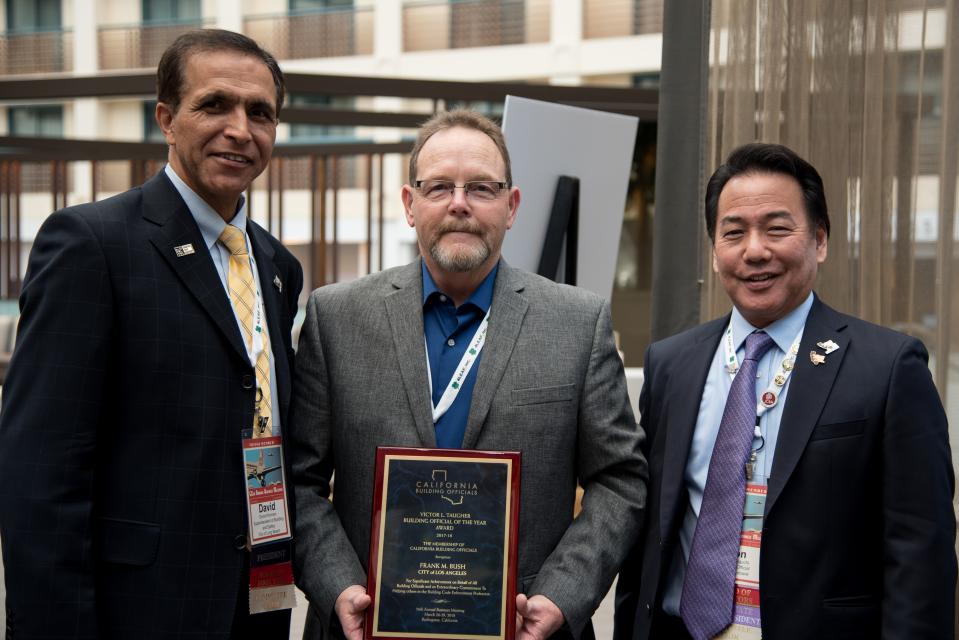 Mr. Bush has been described as a “change” manager; one who cultivates ideas from staff and customers, as well as his own, and helps turn them into tangible improvements.  Under his leadership, the Department has launched QR Code Scanning to simply the permit application process, the Building Information Online system to help customers easily find parcels and buildings on a city map, the Existing Buildings Energy & Water Efficiency Program, and more.

Mr. Bush has long been fully engaged in the Code Development process by attending hearings and providing public testimony on various code amendments.  He is an accomplished presenter and orator, clearly articulating goals and messages to his audience.

CALBO is extremely fortunate to have Mr. Bush as an active CALBO member and we are forever grateful for his insight and contributions.  Congratulations, Frank!

Mr. Rocque Yballa is the 2017-2018 Fire Official of the Year Award recipient.  Mr. Yballa has had an extensive career in the California fire service, beginning in the State Fire Marshal’s Office and spending the past nineteen years in municipal fire department service.  Mr. Yballa currently serves as Division Chief/Fire Marshal of the Central County Fire Department. 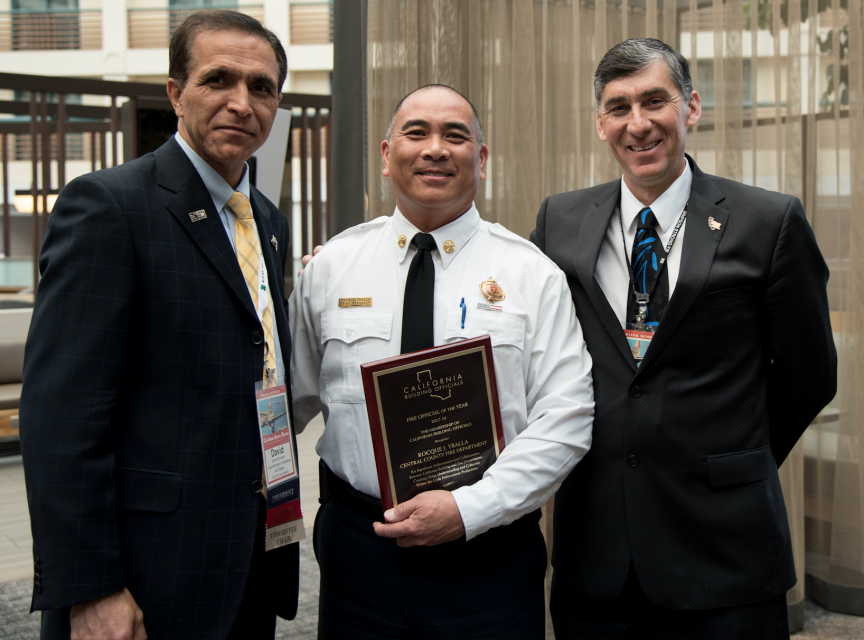 Mr. Yballa has been an active member and contributor in the Northern California Fire Prevention Officers Section (NorCal FPO) of the California Fire Chiefs Association, having previously served as Chair of the Code Committee.  In that capacity, Mr. Yballa led efforts to get residential fire sprinklers approved in the model code.  Due to these efforts, the NorCal FPOs recognized Mr. Yballa with the Charlie Gray Award.

Public and building safety is a shared responsibility among fire and building officials.  CALBO as an organization prides itself on working hand-in-hand with local fire departments.  Officials, like Mr. Yballa, help bridge the gap and between the two respective fields creating a beneficial, long lasting relationship ensuring public safety for all.  Congratulations, Rocque!

Interwest Consulting Group is the 2017-2018 CALBO Industry Achievement Award recipient.  Interwest has played a significant role within the CALBO organization, as well as local government, serving and promoting the building and code and code enforcement professions for over fifteen years. 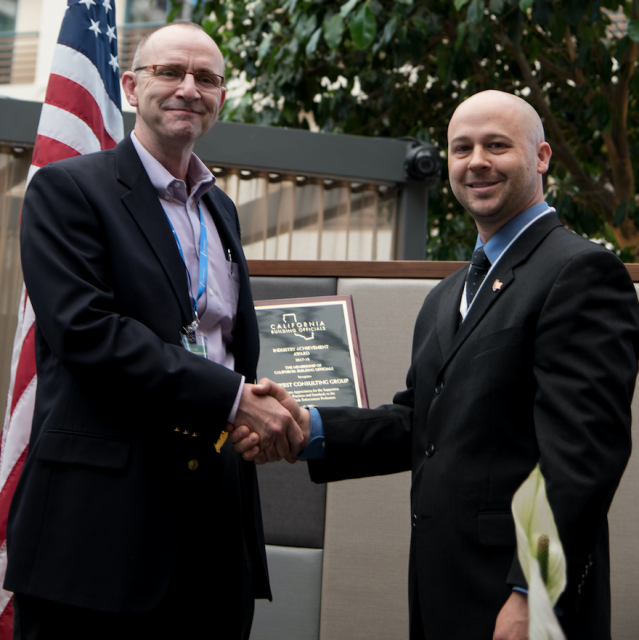 With every CALBO event, Interwest plays a critical role and is never lacking in presence and contribution.  Interwest currently provides over 230 employees to more than 200 public agencies.  These staff members provide services on building and safety, city engineering, construction management, geographic information systems, land development design, storm water management, transportation design, and more. Each staff member offers the same level of professionalism in customer service and technical insight, well serving their call to support local governments.  Interwest prides itself on their dedication, their integrity, and their quality leadership to provide the best service to their clients, which is clearly visible through their role within CALBO.

Thank you for Interwest for continually raising both the technical and professional bars in your industry.  Congratulations, Interwest Consulting Group!

Mr. Robert (Bob) Raymer is the 2017-2018 CALBO Hall of Fame inductee.  Mr. Raymer began working with the California Building Industry Association (CBIA) in 1981 as a Staff Engineer and has been a member of their advocacy team ever since.  After having obtained his license as a Professional Engineer (Mechanical) in 1985, he was promoted to the position of CBIA Technical Director.  Since that time, Mr. Raymer has represented California homebuilders at the local, state, and national level on such code-related issues as energy efficiency, green building design, disabled accessibility, fire safety, and indoor air quality.  More recently, Mr. Raymer has served as the Chair of the Building Standards Commission’s Green Building Code Advisory Committee. 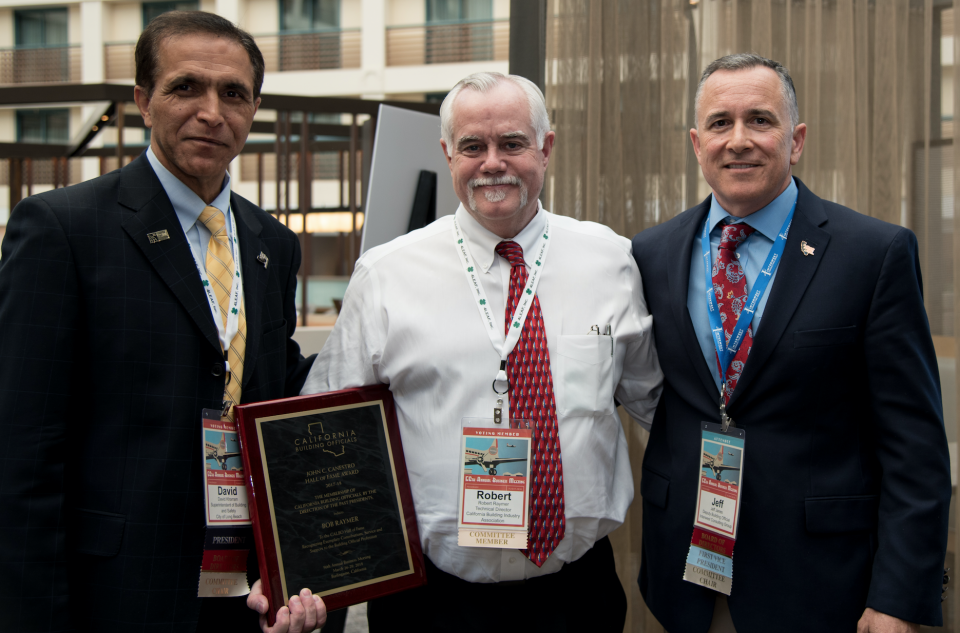 Mr. Raymer has long been an active member of the CALBO community, serving as a strong ally on legislation in the California State Legislature.  Over his decades in this capacity, he has forged strong relationships with CALBO leadership, staff, and, most importantly, the membership.  He is a steadfast advocate to prudent public policy, and is a natural coalition builder between construction industry stakeholders.

The CALBO community is extremely grateful for the professional relationship, as well as friendly mentorship, that Mr. Raymer has contributed to its membership over his illustrious career. Congratulations, Bob!

Mr. Jay Elbettar is the 2017-2018 CALBO Lifetime Honorary Member Award Recipient.  Mr. Elbettar served as the President of CALBO during the 2008-2009 term and has authored an extensive and diverse career in the industry.  Though his code career began in 1990, his admiration for the profession and first work experiences came with a Greek firm in the Middle East.  He then spent nearly a decade with the U.S. Army Corps of Engineers before moving to plan checking in Glendale, and became Building Department Director with the City of Newport Beach.  He has been with the City of Mission Viejo since 2010, through his role with Charles Abbott Associates, Inc. 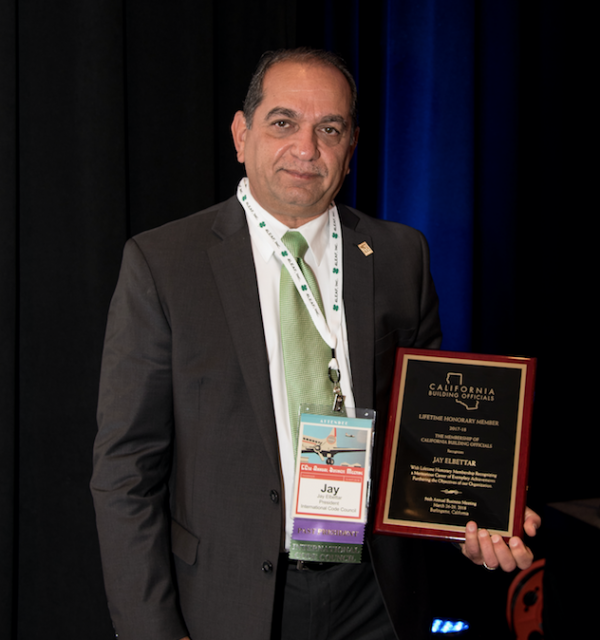 Mr. Elbettar has given back to his profession through his long membership with CALBO, serving on the Board of Registration for Engineers and Land Surveyor (BORPELS) Committee as a Schwarzenegger appointee, the Disabled Access Committee, the Building Standards Committee, and Chairing the Automation and Newsletter Committee.  He also served as an Instructor for the CALBO Training Institute.  Outside of CALBO, Mr. Elbettar has chaired numerous committees and chapters for the International Code Council.  He is currently serving as ICC President.

The CALBO community has long benefited from the work of Mr. Elbettar and is very proud to name him as a Lifetime Honorary Member.  Congratulations, Jay!  Fight On!

Ms. Ciara Barnett is the 2017-2018 recipient of the CALBO Training Institute (CTI) Instructor of the Year Award.  Ms. Barnett is the Field Office Manager for the San Gabriel Valley Office of the Los Angeles County Department of Public Works’ Building and Safety Division. 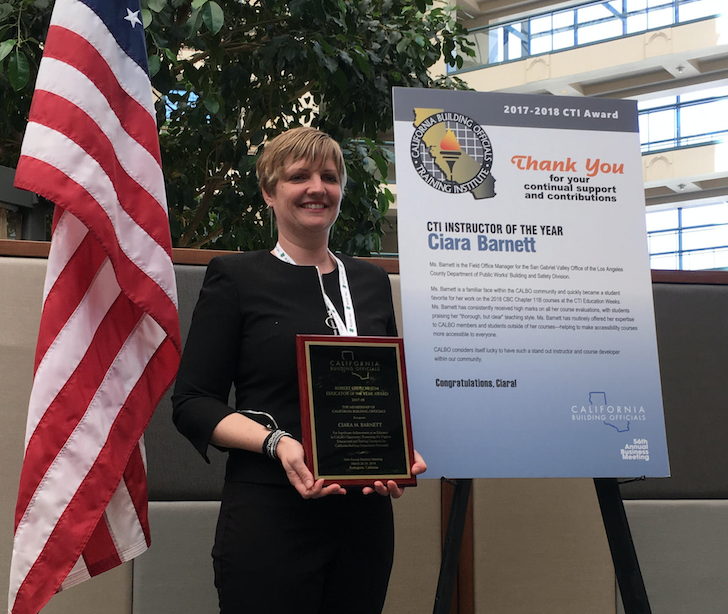 Ms. Barnett is a familiar face within the CALBO community and quickly became a student favorite for her work on the 2016 CBC Chapter 11B courses at the CTI Education Weeks.  Ms. Barnett has consistently received high marks on all her course evaluations, with students praising her “thorough, but clear” teaching style.  Ms. Barnett has routinely offered her expertise to CALBO members and students outside of her courses – helping to make accessibility courses more accessible to everyone.

CALBO considers itself lucky to have such a stand out instructor within our community. Congratulations, Ciara!

Back
This item appears in:
This article has been archived and may contain content that is out of date.