Awards and Hall of Fame

Awards and Hall of Fame

It is with great pride to introduce the 2018-2019 CALBO Awards Recipients. CALBO is proud of the contributions of these CALBO Members.

Building Department of the Year – City of Lake Forest 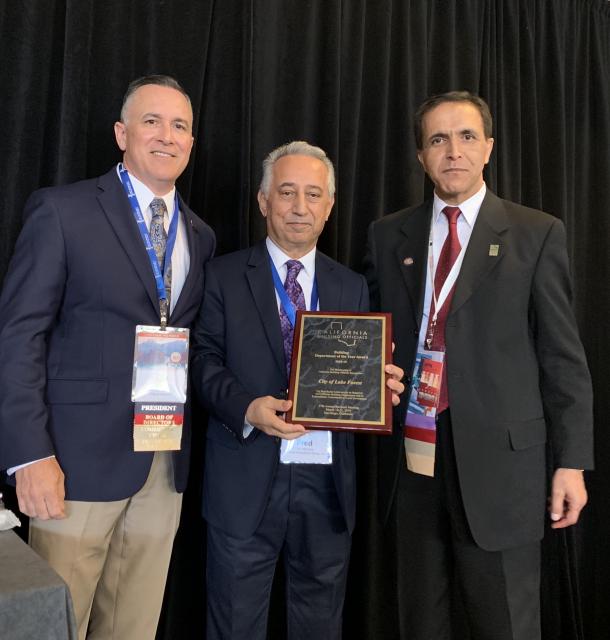 City of Lake Forest is the 2018-2019 recipient of the Building Department of the Year Award setting itself apart with its excellent service through thoughtful and responsive customer service, the implementation of thorough and systematic regulatory procedures and a consistent approach to construction oversight.

Since 2008, City of Lake Forest has experienced the emergence of several new communities from what had been the El Toro Marine Base. This has required its building department to accommodate the service needs of existing residents, as well as new and established small and large-scale developers and builders. During the 2017-2018 fiscal year, City of Lake Forest Building Department serviced over nine thousand walk-in customers, performed over twenty-four thousand inspections and issued almost three thousand permits. The City of Lake Forest Building Department has responded with a high level of professionalism and involvement that resulted in positive survey reviews, which placed the building inspection services near the top of the satisfaction scale at 95%. 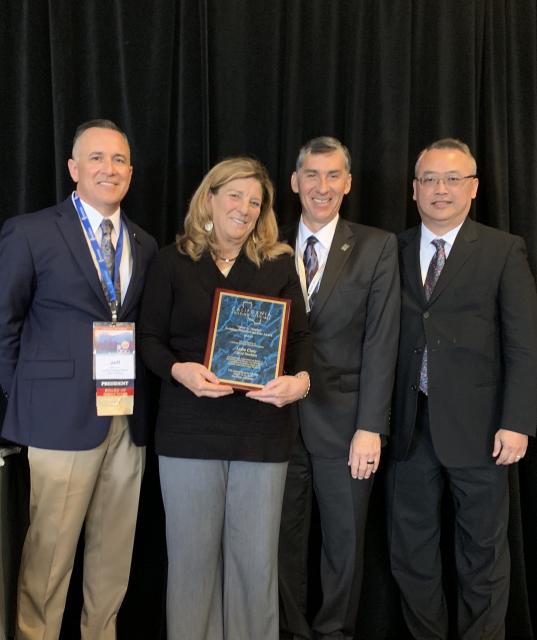 Ms. Lydia Clary is the 2018-2019 Building Official of the Year.  Ms. Clary currently serves as the Deputy Community Development Director, Building Official at the City of Stockton. In her tenure at City of Stockton, Ms. Clary brings a renewed focus towards overall community safety, applying the life and safety building codes in a manner that is easy to understand for both department staff and community members. Ms. Clary optimizes collaboration, having cultivated positive and productive working relationships with building department staff, other departments, including fire prevention and code enforcement, and other industry members, including the Yosemite Chapter of ICC.

Outside the building department, Ms. Clary is actively involved in helping educate the next generation at the Lincoln High School Engineering and Construction Academy by providing students with internships, professional development opportunities, code enforcement and a general awareness about careers in the local and state building divisions. Ms. Clary sponsored building department support for Lincoln High School’s entry in the Sacramento Regional Builder’s Exchange state-wide competition, Design-Build Competition, by providing city plan review service and issuing a building permit for the structure. This participation by Ms. Clary and the City of Stockton Building Department helped Lincoln High School win first place at the 2018 competition.

CALBO is extremely fortunate to have Ms. Clary as an active CALBO member, and we are grateful for her contributions to the next generation of building-safety professionals. Congratulations, Lydia!

Chief Dennis Mathisen is the 2018-2019 CALBO Fire Official of the Year. Chief Mathisen has been a member of the California fire service for over 30 years having started his career with the American River Fire Protection District in 1985. Since then, he has worked at Roseville Fire Department, National Fire Protection Association, Sierra College and CALFIRE. At the Office of State Fire Marshal, Chief Mathisen held an array of positions, including chief of state fire training, chief of public education and information officer. However, most notable of his positions came from the appointment by Governor Brown as State Fire Marshal in 2017.

CALBO is an organization that prides itself on working hand-in-hand with local and state fire officials ensuring public and building safety. Officials, like Chief Mathisen, help bridge the gap between the two respective fields creating a beneficial, long lasting relationship. Congratulations, Dennis! 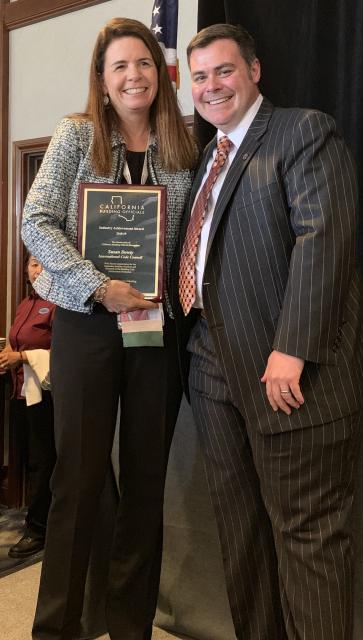 Ms. Susan Dowty is the recipient of the 2018-2019 CALBO Industry Achievement Award. She is a significant and trusted partner within the CALBO community, as well as the building-safety industry, serving and promoting the building code and code enforcement professions for over thirty-five years.

Ms. Dowty serves as a Regional Manager and member of the Government Relations team at the International Code Council (ICC).  In this role, Ms. Dowty works in collaboration with the ICC chapters, members, stakeholders and all parties interested in advancing the mission of the ICC to support the adoption and use of the highest quality codes, standards, products and services for the safety and performance of the built environment.

Prior to her role at ICC, Ms. Dowty led an accomplished career within the public, private and nonprofit sectors as a Structural Engineer.  Her detailed work and strong understanding of the codes led to an appointment by Governor Arnold Schwarzenegger to the California Building Standards Commission.

The CALBO community has greatly benefited from the work of Ms. Dowty, and it is our honor to award her with the 2018-2019 CALBO Industry Achievement Award. Congratulations, Susan!

Mr. Y. Henry Huang is the 2018-2019 CALBO Hall of Fame inductee. Mr. Huang had recently retired but still devote his time to educating the public and the profession on building and seismic safety issues.    Mr. Huang has over 40­­ years of industry experience within the public and private sectors, experiences that have fostered a solid understanding of thriving building departments. His books, The 2006, and 2009 IBC CheckList: Structural Provisions for the international Code Council, provided a clear roadmap for sorting through the multiple reference structural standards.

In one of his largest roles, Mr. Huang was the Building Official for the City of Tustin, where he oversaw the construction of over 750 dwellings. Of note during his tenure in Tustin was the development of The District at Tustin Legacy, the largest shopping center of the last decade in Orange County.

Mr. Huang has played an active role within the CALBO community in multiple roles, including the multi-year Chairmanship of the CALBO Structural Safety Committee.  He is the main author of the CALBO White Paper on Steel Moment Resistant Frame (SMRF), a major policy statement after the Northridge Earthquake. He represented local building officials serving on OSHPD Hospital Building Safety Board since 2012. Mr. Huang used his knowledge on structural safety to develop courses and instruct at CALBO Education Weeks and worked to provide valuable tools for the membership.

Mr. Huang believes the purpose of a building department is to provide future occupants of any structure a safe place to live, work and play. CALBO is thankful for the years of work and dedication that Mr. Huang has contributed to making our Golden State’s structures a safer place. Congratulations, Henry! 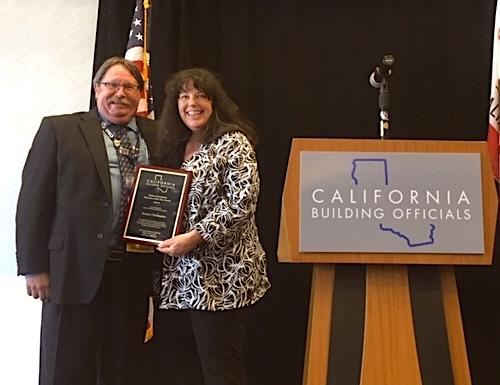 Ms. Yvonne Christopher is the 2018-2019 recipient of the CALBO Training Institute’s (CTI’s) Educator of the Year. Ms. Christopher is a valued course developer and CTI instructor, bringing over twenty-two years of industry experience.

Prior to her current tenure as a Principal Plans Examiner at CSG Consultants, Inc., Ms. Christopher held multiple posts within the industry and building inspection profession. She served as the Building Official for the County of Monterey, the County of Butte and the City of Brentwood. Additionally, she served as faculty within Butte College’s acclaimed Building Inspection Technology Program.

At CTI Education Weeks, Ms. Christopher brings her experiences from the private and public sectors to benefit up-and-coming code officials in the CALBO community. She not only continues to develop new course materials for plan review courses, but she incorporates hands-on exercises to enhance the student experience and accommodate diverse learning needs rather sole reliance on lecture as a singular teaching module.

For decades, Ms. Christopher has been well known for her mentorship of accomplished building-safety professionals. This same dedication is highlighted by the time she spends answering questions and discussing material with students outside the CALBO classroom. Ms. Christopher continues to be one of the highest ranked CTI instructors, and we are proud to include her within our community.

Ms. Christopher is not a stranger to this award, which she proudly earned in 2002 as well. We congratulate Ms. Christopher for her many accomplishments, which now includes two-time accolades as the CALBO Training Institute Educator of the Year. Congratulations, Yvonne! 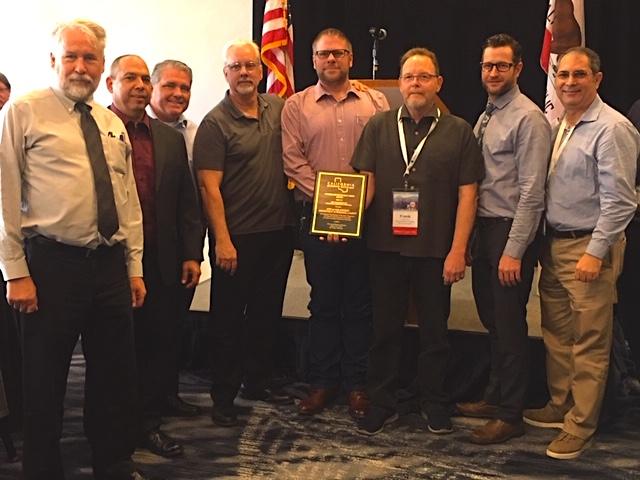 The staff of the City of Los Angeles, Department of Building and Safety is the recipient of the 2018-19 Course Development Merit Award, recognizing their steadfast contributions to CALBO Training Institute (CTI) course development. Their accomplished department continues to foster a strong relationship with CALBO training endeavors, greatly benefitting the membership through their shared contributions and resources.

This past year, City of Los Angeles staff members collectively developed six courses currently offered in CALBO classrooms. Tim Wang, Tony De Santis, Daniel Schneidereit and Brandon Ives all made notable contributions through the development of five new courses covering the plumbing code, the mechanical code, residential and non-residential plan review, and geological and geotechnical review. Additionally, Sean Dang, Edward Garcia and Armond Gregoryona assisted with Safety Assessment Program courses and their subsequent revampment. CTI Commissioner Frank Bush, Superintendent of Building for the City of Los Angeles, worked to coordinate these courses serving as a liaison between the developers and the CTI Commissionensuring up-to-date code training and the use of relevant field experience.

With the department’s unparalleled support of educational endeavors within the building-safety industry, coupled with the success of new courses and training resources for CALBO members, the CALBO Training Institute proudly awards the City of Los Angeles, Department of Building and Safety with the 2018-19 Course Development Merit Award. This is the first time a department has received this award, and we are honored by the work accomplished by these exemplars of our profession.

Congratulations to the City of Los Angeles, Department of Building and Safety!

Building Department of the Year

Building Official of the Year Award

CTI Educator of the Year

Fire Official of the Year Award